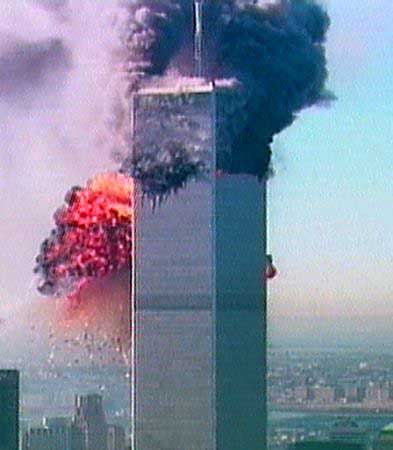 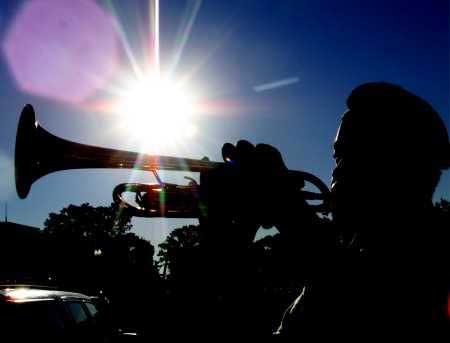 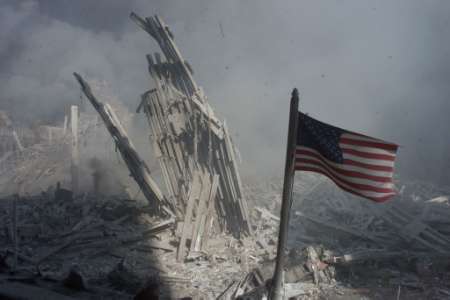 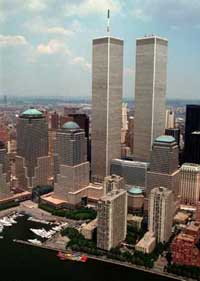 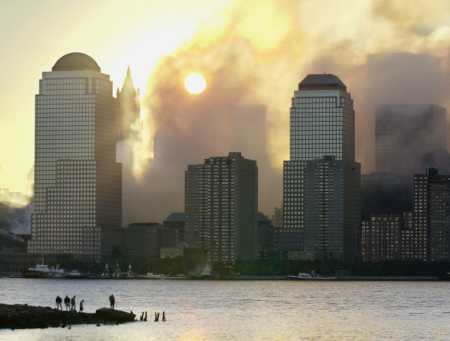 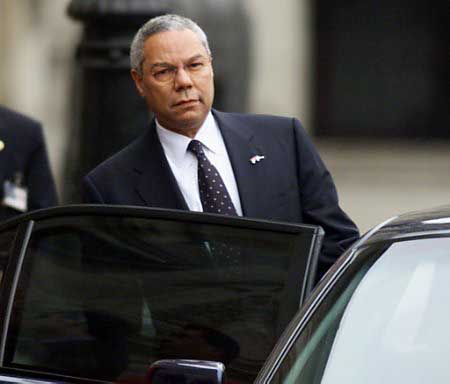 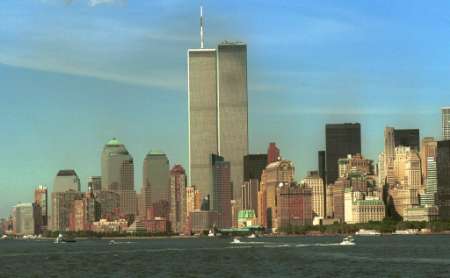 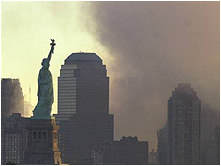 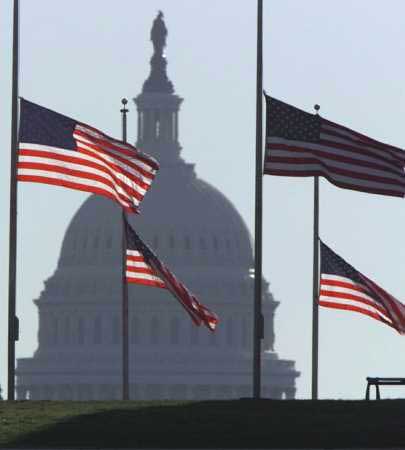 ~ Here Are Some Words To Live By ~

~ Love Changes Everything ~
Love will turn your world around
~ Nothing in the world will ever be the same!

Listen to the Song ~ Love Changes Everything

This is an e-mail from a friend of a friend ~

Greetings! ~ Thank you all for your calls, prayers and concern over the last 24 hours. Although I was in World Trade 1 when the first plane hit yesterday, I was able to make it not only out of NY, but home and back with my family last night and am very thankful. Many of you have asked for a detailed account of what happened, where I was, etc., and everyone says its good to talk about it, so here are the events as best I can recall.

At 8:00am I left the Hilton on 6th and 53rd, taking the 1 subway downtown for a meeting with Prudential Securities, scheduled at 9:00. As I was running a bit early, stopped off at World Trade, where I walked through the trade center underground to World Trade 1 and started having breakfast at a small cafe. As I finished breakfast around 8:45, there was a slight vibration in the air and the air pressure noticeably changed. Shortly after, people started running and shouting about a bomb. Instead of getting stuck in the mob trying to get out, I headed immediately back down to the subway 1 and was lucky to catch a train just leaving the station. I got out 5 minutes later at the South Ferry Station, which is where my meeting with Prudential was. South Ferry is a few blocks southwest of Trade Center where the ferries go across to NJ. I noticed WT1 was on fire and at that point found out a plane had hit the building from the crowds outside.

I paged my contact at Prudential and he called back. I described what was going on and suggested we have the meeting outside at the park. As soon as he came down, the second plane flew directly over our heads, coming up from behind us and exploding into the south building, World Trade 2, directly in front of us. The plane was close enough that we could actually feel it go by. The engines were screaming and seemed to be at full throttle. The plane was moving so fast we could only tell it was a large jet, not being able to make out the airline or whether there were any passengers from underneath. The concussion from the blast of the explosion nearly knocked us down, but luckily we were far enough away to be free of the debris. The deafening sounds of all the sirens was replaced with ringing ears. At this point we gave up on the meeting and he left to call his family. I attempted to call my family, but cell phones were already useless.

From here on I was alone.

I stayed and watched the fire for about 15 minutes from the park at South Ferry, where I had a good view of the hole on the south side where the second plane hit. Most of the fire was on the east side of the building, as the plane had pushed nearly through - probably most of the fuel as well. After awhile I could see several people waving frantically from the hole where the plane went in. At this point I decided to start getting out of there, as fire was getting worse in both buildings and everything was closing down. More and more fire engines and police were moving in. I started east towards Wall Street, where I knew there was a subway 6 station that could get me back uptown.

I arrived at the subway station at the top of the hill near Wall Street and had a very good view of the east side of the towers. The fire was much worse and I decided to stay and watch, knowing I could jump on the subway and get out of there if needed. I watched the sides of the building, probably aluminum, melt and drop in big glittery balls and the fire was very intense. The structural steel inside the building was glowing red. I was able to clearly see several people jump from above the floors on fire from WT2. Paper and other debris being caught up into the cloud of smoke was sifting down on myself and the others watching, as we were downwind of the towers. The bells at the church at the top of Wall Street chimed 10:00, and about the time I mentioned to those around that the building structurally was probably in pretty bad shape after an hour of very hot fire and the plane probably taking out support beams, two big I-beams or large girders seemed to explode away from the southeast corner of the south tower, WT2, and all the upper floors collapsed down very fast. Being only maybe five or six blocks away, I saw the huge cloud coming and ran with the rest of the crowd to get away. Watching behind me as the cloud very quickly approached up through the high buildings reminded me of the scenes of people running from nuclear bomb clouds in movies. People were running, falling, screaming.

The cloud was upon us in a matter of seconds and everything became very dark. The amount of smoke, debris and dust in the air was so thick you literally could not see the ground you were walking on or your hand in front of your face. Fortunately, I had a small hand towel I use normally as a sweat rag, and was able to use this to breath through. The buildings in the area were already closed and there was nowhere to go. Everything was silent - all the sirens that had been echoing were gone or dampened by the thick air. I stumbled around for awhile and at one point ended up in front of the NY Stock Exchange where the bull is. I had no idea where I stumbled; was just looking for air to breath. It was eerie, as there was no one else on the street, everything was gray with several inches of fallout and all was silent. It certainly did not feel like mid-day at the center of the financial world. I finally got a sense of direction and tried to head further west towards the river. After making it to where I could see a little better, police stopped me and actually turned me back towards the trade center area. They were trying to funnel everyone towards the west side where the ferries went to NJ, but I wanted to stay away from the crowds, so walked a block and got around police barricades, heading north, uptown. I made it north almost even again with the trade centers when the second building came down. This time I ran north towards midtown, stumbling through debris from the first implosion. There were parts of people's lives in the streets - clothing, shoes, lunches, body parts, that had been blown from the first building when it imploded. I clearly remember a baggie full of purple grapes next to a white sweater with an arm. Oddly, there was no blood. I finally made it north enough to get clear of the debris area, and finally past the northern police barricades. People were stopping me to ask if I was okay. Seeing myself in a store window, I realized I was covered in about 1/2 inch of fallout and looked like something out of a horror movie.

I shook off as best I could and found my way to Broadway and walked all the way North to 6th and 53rd, where the Hilton still had my bag. Almost to the Hilton, I finally heard from Amber, who I had been trying to call continually for three hours to let know I was okay. She had also been trying to call me and was frustrated knowing I was in NY, but didn't know where. I had lost track of time by this point, but it was just after 12:00. I had been running, walking from the scene for two full hours and just then realized I was drenched with sweat. The run, run and walk was miles. There was no subway, all the taxis had disappeared and there was no other way. Amazingly, as I got up through midtown, people were talking about it and gawking towards downtown, but didn't really seem to realize the scale of what had happened. People were still eating in restaurants, laughing; most staring at me as I stumbled on my way. Up in midtown, I saw no others like myself - most must have gone other ways.

I was fortunate enough to be able to change at the Hilton and headed back to Penn Station. Getting there, I found a huge crowd in the street and the station was closed. An Announcer using a bull horn said there would be no mass transit and to walk to the Brooklyn Bridge - several miles from there. This was the only way off Manhattan; tunnels, subways, everything was shut down. I decided to stick it out and see if maybe the station would reopen. Around 2:00 they opened the station and I was one of the first few in, but everything inside was closed and there were no ticket agents or Amtrak people. All had gone home when they closed the station. Finally they started letting trains go and I was able to get on the first Amtrak headed south, about 3:30. Amtrak allowed anyone on the train that wanted to get out of NY - no tickets needed. The train was very packed until Newark, where most NJ commuters got off. The normal 2 ˝ hour ride took nearly four hours to get down to Baltimore.

I'm happy to be home with my family and feel very fortunate. I feel sick for those who lost loved ones in the tragedy. I had friends at World Trade that probably didn't make it. ~ Jerry 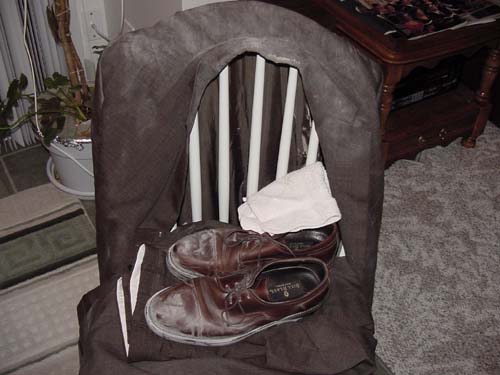 Jacket and Shoes That I Had On, After Brushing Them Off

We have more stories ~
Please come back when we've had a chance to put them here for you.
Thank you.